Evidence-based medicine (EBM) is the conscientious, explicit, and judicious use of current best scientific evidence in making decisions about the care of individual patients. 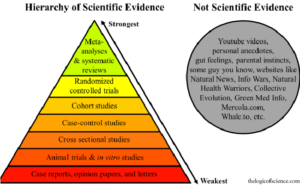 While we would like to think that scientific evidence has always been the basis of modern medical practice, over the last few decades there has been an exponential improvement in research study design and rigorous data analytics such that clinicians and administrators have been the beneficiaries of increasingly valid and actionable study results and conclusions.

With respect to study design, this is often depicted as a hierarchical pyramid in which, for example, single case reports are at the lowest tier and are the least persuasive, whereas randomized, blinded, controlled studies (RCTs) and systematic reviews/meta-analyses are at the peak of the pyramid, and constitute the “gold standard” of research methodology. So we have moved from a reliance on small, uncontrolled studies to large-scale (and often geographically widespread) studies in which matched patient populations are prospectively given one treatment or another  (or no treatment at all in the form of a placebo or sham procedure) and outcomes are measured over many years.

Furthermore, the results of multiple RCTs may be aggregated to produce sophisticated meta-analyses that have greater statistical power than any single RCT in isolation.

However, the process does not end there. There next needs to be a sifting and critical evaluation of the evidence produced through a myriad of studies on any single topic. This is the task of specially-constituted expert panels of physicians. These editorial advisory boards,(assembled by various clinical specialty societies, medical universities, government entities, medical publishers, and similar organizations), translate the research described above into treatment guidelines to be applied by medical practitioners in the course of clinical care. Of course, these same guidelines are equally useful for those evaluating the medical necessity and appropriateness of treatment being proposed or delivered by physicians, and also helpful for any other interested stakeholder in the medical management arena.

Let’s illustrate this using a procedure (one which I fabricated) called electromagnetic plasma fusion, or EPF, which is being promoted for various soft tissue injuries. The advisory panel (likely consisting of orthopedists, physiatrists, occupational medicine physicians, Ph.D. statisticians, etc.) gathers and reviews all the available research evidence about EPF, eliminating studies from the bottom of the pyramid, and placing greater weight on studies at its apex. After considerable discussion and the use of group consensus techniques, the panel may decide that EPF has not met the threshold to be deemed a scientifically beneficial technology, and it will publish a guideline with a “not recommended” determination, and its rationale for this decision.

On the other hand, the panel may feel that EPF has a place in the toolbox of treatment for certain conditions, and it will produce a clinical guideline that documents under what circumstances it should be offered, e.g. which patients may benefit; when to use it in addition to, or in place of, alternative therapies; how frequently it should be used, etc. All of this may be summarized in a graphical algorithm for ease of use by clinicians.

There are now thousands of published guidelines from many sources on multiple topics, and many are publicly available at the National Guideline Clearinghouse site:

Particular sets of national guidelines have been uniquely developed for the workers’ compensation/disability market.

The guidelines below are available electronically via paid subscriptions.

Studies confirm that the use of clinical/duration guidelines results in measurable impact:

It should be noted that many states endorse or mandate specific guidelines to be used for formal utilization review and related medical management purposes, and typically either ACOEM or ODG have been selected by these states’ regulatory bodies. However, several states have developed their own sets of guidelines, which are freely available on state websites. Finally, some states are entirely silent on the subject of guideline selection. Consequently, it is important that guideline users be aware of the relevant regulations state-by-state, i.e. claim adjusters, utilization review and case management nurses, and physician reviewers.